Jason Banks had no idea of his impact on the ultimate future of COMC. Back in early 2008, he was just trying to capitalize on a business model he deemed unique and also potentially lucrative for him.

Having won approximately 100 auctions on eBay, he decided to have them sent directly to COMC’s address. The problem was, COMC was using a mailbox service at the time – and was used to receiving just a few packages per day. So when 100 or so packages arrived, the mailbox service quickly put a kibosh on this practice.

This situation, of course, led to the company leasing commercial space in Overlake Business Center (a business development we’re still located in, just down the street and in a bigger building). It goes to show that one person truly can make a difference!

As for Banks, his cardshark account is ranked second on our top buyers list. But he’s easily the largest flipper on the site (having purchased more than $100K BV with the sole purpose of re-selling on the site rather than requesting shipment on the cards). This has made him 9th on the top sellers list.

“My focus is to flip cards,” said Banks, who runs an intellectual property (domain names, etc.) business in Boynton Beach, Florida. “It’s just like the stock market, with diversification being the key.”

Banks, a former Florida state trooper and a City of Miami Beach police officer who has a law degree from the University of Miami, grew up in a house filled with Lenny Dykstra memorabilia.

“My dad was a huge fan and he just went crazy buying cards,” said the 46-year-old. “He’d send them out in the mail and they’d come back signed.”

When considering COMC, Banks recalls being initially struck by the background of COMC CEO Tim Getsch. “What really impressed me was Tim’s history with Microsoft. Anyone that had that handle (on site development) was going to do a very good job with the site.”

We are extremely pleased with the growth. We are already starting to max out our warehouse and need to start planning for a move into a larger space.

Since my last blog post we have reached many milestones. We now have more than 200,000 cards for sale, and I was planning to do one last blog post with my timgetsch account in the #10 spot of the top sellers list. However, today DKShultz took over the #10 spot. 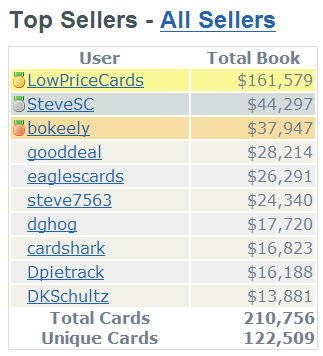 DPietrack also called me today to let me know he hit 1,000 total cards sold. So I dug into it and noticed that 4 sellers have now reached 1,000 cards sold. SteveSC, prestongillespie, and cardshark are the other sellers. My timgetsch account has sold more than 2,000 cards, and my LowPriceCards account holds the lead with more than 10,000 cards sold.

This week DPietrack became the first consignment seller to sell more than $10,000 BV worth of cards. He only started selling a little over two months ago. He is offering great cards at amazing prices, and they have not been lasting long. If you see something you like, you better grab it soon.

This week we also crossed another milestone. We now have 10 sellers that have more than $10,000 BV worth of cards on the site. 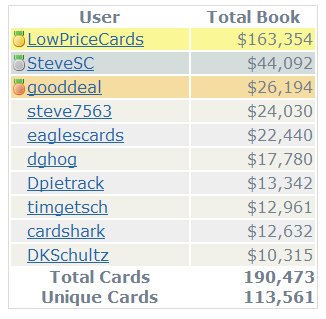 SteveSC is one of our top sellers, and when he mentioned that this was the first month where he made more money off sales from COMC.com than he did from the card shows he does on weekends, I decided to see exactly how we were doing…

Wow! The site is definitely back up and working smoothly. This week we have been setting records for number of orders and size of orders. Several people have been placing 100+ card orders.

Yesterday we set another record for most sellers in one purchase. Someone from New South Wales, Australia placed an order for 139 cards from 30 different sellers and only had to pay $20 for shipping to Australia. That is absolutely amazing!

All of the cards were Michael Jordan, Tim Duncan, or David Robinson cards.

Here were the sellers involved with the sale.