With just four weeks left in the season, Managers are jockeying for position as they look to improve their overall league standings OR stack their roster towards one particular stat to maintain a lead or gain ground in the individual stat standings. Over the last two weeks, the rich have gotten richer while one Manager made a strong push towards the Top 5.

If you’re not familiar with our scoring system or the rules of our league, you can read our introductory blog here. If you’ve missed some updates and want to catch up on how we got to our current standings, you can read all pack battle league updates here.

In overall league standings, Kevin’s eight points over the last two weeks helped pad his healthy lead over the field. James slides into second with a five point performance. Sean and Brandon enter a tie at the third and fourth place while Jeremy hit a mid season slump and falls one spot to round out the top 5. Tad’s seven point performance catapulted him up the standings from 12th to 7th, placing him just outside of the Top 5. He’ll look to continue the impressive run and muscle his way into the Top 5 over the final four weeks of the season. 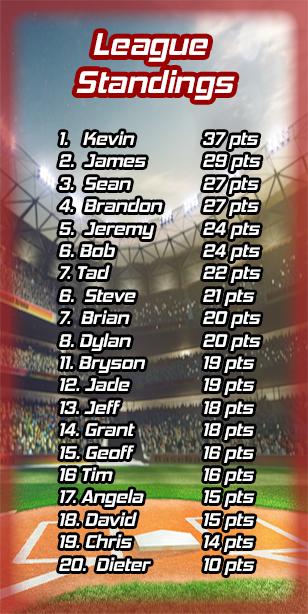 With back-to-back second place points showings in weeks 11 & 12, Tad has positioned himself in 2nd place with 16 points just behind James’s leading 18 points. Sean sits in the three spot with 15 points, and three others are tied at 14 to round out the top five.

Despite having an excellent showing over the last two weeks, Kevin was not able to add to his league leading 12 points in the Hit King Standings. Brandon also stood pat with 10 points, still good for a tie for second with James. Both remain within striking distance of overtaking the lead. Rounding out the top five is Jeff and Jade, who are each tied with 8 after adding three points to their totals..

Kevin’s back-to-back wins in Weeks 11 & 12 meant that he leapfrogs the field and sits atop the Strikeout King leader board with 11 points. Jeremy sits just two points behind him, while Steve, Dylan and Brian are all tied with 8 points a piece.

Strikeouts remain a hot commodity to pull from our 2018 Topps Opening Day packs, and the Managers gunning to take down the Strikeout King category are in trade mode as they look to stack their team with strikeout pitchers at the cost of premium hitters. 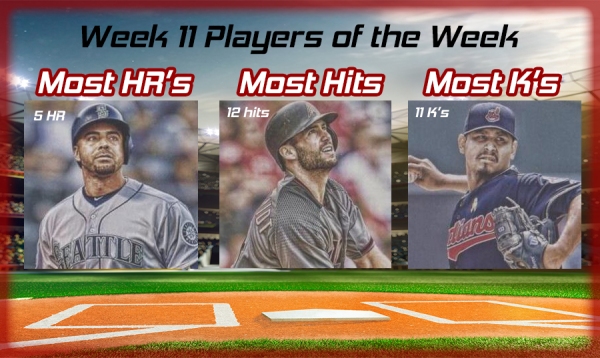 Home runs came at a premium this week as just three home runs were good enough for first-place points. With the bar so low, 13 of our Managers were able to nab points in the category. Jade (Eddie Rosario, Paul Goldschmidt) and James (Nolan Arenado, Carlos Correa) mustered up 18 hits a piece to tie for first place points in hits. Kevin piled onto his league leading points total and overtook the Strike Out Kings lead on the 18 combined strike outs of Julio Teheran and Sonny Gray.

We have just two updates left until the conclusion of our inaugural Pack Battle League. We’ll be back in a couple of weeks to break down all of the week 13 & 14 action!